What Does SPAM Mean?

SPAM means "unsolicited messages," "game play or activities detrimental to the game," and "Spiced Ham" (or "Special Processed American Meat"). Here is more information about each of these definitions of SPAM, with examples of use.

SPAM is widely used as a slang word to refer to unsolicited messages. SPAM messages are usually sent for commercial purposes or to facilitate fraud, such as PHISHING. SPAM comes in many forms, including text messages, emails, posts in blogs and chat forums, and even in comments or "likes" on social-media posts.

Here is an example of SPAM used in a conversation:

Gameplay or Activities Detrimental to the Game

In gaming, SPAM also refers to an unskilled form of play, in which the player keeps their finger on the trigger and achieves kills by spraying bullets rather than through skill. Such activities are considered detrimental to the game. For example:

The term SPAM actually comes from the name of a brand of canned meat produced by Hormel Foods Corporation based in Austin, Minnesota (US). The name was derived from a contraction of the words "spiced" and "ham."

SPAM canned meat gained worldwide popularity after World War II. In the UK, it was mistakenly treated as an acronym for "Special Processed American Meat," and it is even used a derogatory term for an American person. In 1970, the UK comedy group Monty Python produced a sketch about a restaurant that served SPAM in every dish. It is thought that this sketch inspired the use of the word SPAM to apply to unsolicited messages. As with SPAM in the sketch, such messages are ubiquitous and repetitive.

When I write SPAM, I mean this: 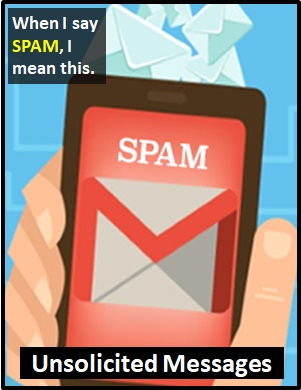 In gaming, SPAM means to play in a way detrimental to the game. It is also an abbreviation for "Spiced Ham" (or "Special Processed American Meat").

In gaming, "Gameplay or Activities Detrimental to the Game" is a common definition for SPAM.

The original definition for SPAM was "Spiced Ham" (aka "Special Processed American Meat").

An Academic Look at SPAM

SPAM is a portmanteau word (i.e., a word made up of two other words). It is formed from the words spiced and ham.

When it means "Unsolicited Messages," SPAM is a slang word. (NB: Slang refers to highly informal words and phrases whose use is often restricted to a special context or a particular group of users.)

Example of SPAM Used in a Text