What Does UK Mean?

The abbreviation UK is used with a number of meanings, including "United Kingdom," "You Know," and "You OK?" Here is more information about each of these definitions of UK.

Many people believe that the UK is just another name for Great Britain (GB). However, this is not true. The UK actually includes all of Great Britain, as well as Northern Ireland (NI) and many smaller islands within the British Isles (but not all of them). The UK most definitely does not include the Republic of Ireland (Eire in Irish).

In text messaging and online chat, UK is often used as an abbreviation of the phrases "You Know" and "You OK?".

"United Kingdom of Great Britain and Northern Ireland" is the most common definition for UK.

"You Okay?" is another common definition for UK.

When I write UK, I mean this: 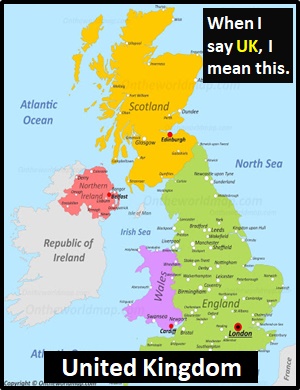 UK also means "You Know" and "You Okay?"

Example of UK Used in a Text

UK
Help Us To Improve Cyber Definitions
Please tell us using this form.