What Does TBH Mean?

Of note, TBH was originally used with a blunt or slightly antagonistic statement to suggest the statement derived from sincerity. In other words, TBH was used to protect the author of an overly candid statement by serving as a caveat with the meaning "I'm only telling you this because I am being truthful." However, TBH has become so common on social-media platforms like Facebook and in chat rooms, its meaning has now been diluted. The meaning of TBH can now range from "I think..." to "I'm sorry for being blunt, but..."

TBH means "To Be Honest" or "Honest Opinion" (especially on Snapchat). This is the most common definition for TBH on Snapchat, WhatsApp, Facebook, and Twitter.

When I write TBH, I mean this: 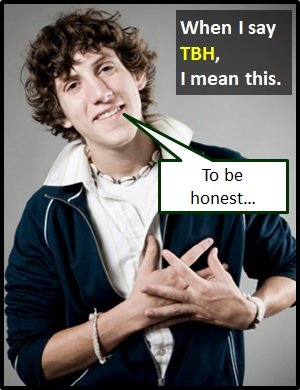 This image shows a man holding his hands over his heart, which is a common gesture to portray sincerity.

Examples of TBH in Sentences

Here are some examples of TBH being used in sentences:

An Academic Look at TBH

TBH is an infinitive phrase. It is typically used as an adjective phrase meaning "Speaking with complete honesty". For example:

Of note, TBH is now used increasingly like a noun meaning "honest opinion". For example:

TBH is an initialism abbreviation. This means it is pronounced using its individual letters (i.e., Tee Be Aich). (Note: Initialisms contrast with acronyms, which are spoken like words.)

Example of TBH Used in a Text