What Does LMR Mean?

LMR means "Like My Recent" or "Last Minute Resistance."

The most common meaning for LMR is "Like My Recent." It is typically used on Instagram and Snapchat as a request to "like" something that the sender has just posted (e.g., "LMR pic," or "LMR comment"). In this context, LMR is very similar in meaning to LMS (Like My Status).

LMR is also used with the meaning "Last Minute Resistance." In this context, it is typically used in conversations between young men to describe how, at the last minute, a woman refused to consent to sex.

"Last Minute Resistance" is another definition for LMR.

When I write LMR, I mean this: 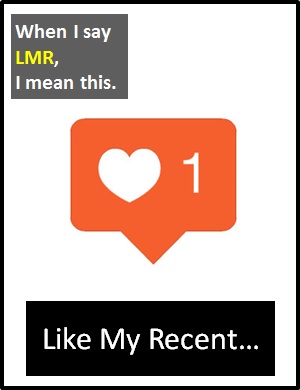 Examples of LMR in Sentences

Here are examples of LMR being used in conversations:

An Academic Look at LMR

When used with the meaning "Like My Recent," LMR is used like an imperative (i.e., an order). However, when used to mean "Last Minute Resistance," it is a noun phrase (i.e., a group of words that play the role of a noun).

As it is pronounced using its individual letters (i.e., "Ell Emm Arr"), LMR is classified as an initialism abbreviation. Initialisms are different to acronyms, which are spoken like words.

Example of LMR Used in a Text

LMR
Help Us To Improve Cyber Definitions
Please tell us using this form.