What Does DWAI Mean?

DWAI means "Don't Worry About It." The abbreviation DWAI can mean different things in different situations. When something bad happens or somebody makes an error and is concerned about it, you might say "Don't worry about it." In these circumstances, the abbreviations NM (Never Mind) or EWBA (Everything Will Be Alright) could also be used.

DWAI can also be used as a response to a question when trying to to keep a conversation vague if you don't want the other person to know too much. It is written as DWAI, but when spoken in person, it is pronounced D-way.

When I write DWAI, I mean this: 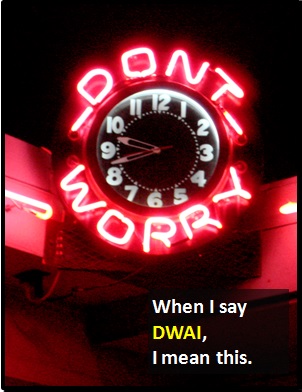 DWAI means "Don't Worry About It."

Examples of DWAI in Sentences

Here are examples of DWAI being used in conversations:

An Academic Look at DWAI

DWAI is typically used as an imperative (i.e., an order). Of note, DWAI can be said like an acronym (i.e., an abbreviation spoken like a word). Acronyms differ from initialism abbreviations, which are pronounced using their individual letters.

Before the digital era, we might have said something like "I wouldn't worry about it if I were you" instead of DWAI.

Example of DWAI Used in a Text