What Does DW Mean?

DW usually means "Don't Worry", but it has other meanings too. More specifically, in a gaming context, the abbreviation DW refers to "Distant Worlds 2." It can also mean "Dear Wife" or "Doctor Who." Here's a little more information about each of these definitions of DW.

In general online chat and in text messaging, DW is often used with the meaning "Don't Worry" to reassure someone. For example:

In a gaming context (e.g., on gaming apps, such as Discord), DW usually refers to the game "Distant Worlds 2." DW is a game of space discovery, in which players meet up at way points to take part in a variety of online events and projects.

Here's a short video explaining how to use DW:

DW is sometimes used with the meaning "Dear Wife." In this context, DW is typically used by married men when talking about their spouse.

DW is also used with the meaning "Doctor Who" to refer to the long-running BBC TV series of the same name. However, this use of DW is generally restricted to devout fans of the show. (Especially for those fans, here's a clip of the title scene of the very first episode of DW.)

When I write DW, I mean this: 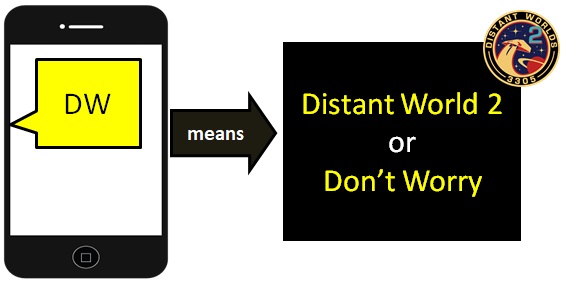 DW is also used to mean "Dear Wife" and "Doctor Who."

"Distant Worlds" is the most common definition for DW, especially on gaming apps, such as Discord and Telegram.

"Dear Wife" is another definition for DW.

DW is also sometimes used to refer to the BBV TV series "Doctor Who."

Examples of DW in Sentences

Here are examples of DW being used in conversations:

(Here, DW refers both to the game "Distant Worlds 2" and to the TV series "Doctor Who.")

An Academic Look at DW

As it is pronounced using its individual letters (i.e., "Dee Dublyoo"), DW is classified as an initialism abbreviation. Initialisms are different to acronyms, which are spoken like words.

When used with the meaning "Don't Worry," DW plays the role of an imperative sentence (i.e., an order).

Example of DW Used in a Text