What Does ONM Mean?

The abbreviation ONM is used in text-based messaging with the meaning "Oh, Never Mind." It is typically used in exasperation, when the other person doesn't seem to understand what is being said.

ONM is also used to refer to "Official Nintendo Magazine," a British video game magazine that ran from 2006 to 2014.

Although (at as August 2020) no new content had been uploaded to the ONM YouTube channel for over four years, it still billed itself as "The UK's number one Nintendo magazine, and your first stop for all the latest news, reviews and previews of Wii, DS, WiiWare, DSiWare and Virtual Console games!"

When I write ONM, I mean this: 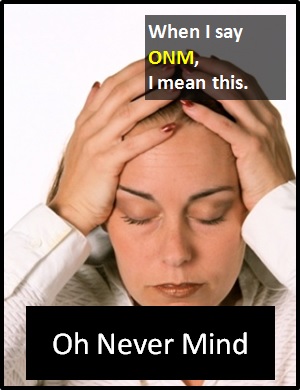 "Official Nintendo Magazine" is a common definition for ONM in gaming related chat, especially on apps such as Discord and TeamSpeak.

Examples of ONM in Sentences

Here are examples of ONM being used in conversations with the meaning "Oh, Never Mind":

An Academic Look at ONM

As it is pronounced using its individual letters (i.e., "Oh En Em"), ONM is classified as an initialism abbreviation. Initialisms are different to acronyms, which are spoken like words.

ONM is typically used as an imperative (i.e., an order).

Before the digital era, we might have said something like "It doesn't matter" or "Forget it" instead of using ONM to mean "Oh, Never Mind."

Example of ONM Used in a Text