What Does STONKS Mean?

STONKS means "Stocks." It is an intentional misspelling because is often used to refer to stocks (and finance) in a humorous or ironic way, especially to comment on financial losses.

STONKS became a meme sometime during 2017. The meme shows a character called Meme Man standing in a suit behind some numbers. The meme was originally used as a reaction image to jokes about making poor financial decisions. Over time, due to its use on Reddit's WallStreetBets, the meaning evolved to literally mean "stocks" (often referring to "Meme Stocks" such as GME (Game Stop), NOKIA, BB (Blackberry), and AMC.)

In early January 2021, STONKS caught the attention of mainstream media due to its heavy use during a "stock market war" over video game retailer GameStop. 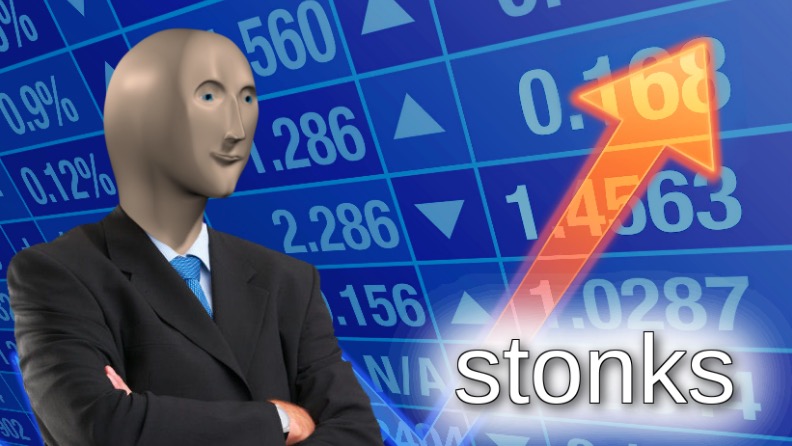 When I write STONKS, I mean this: 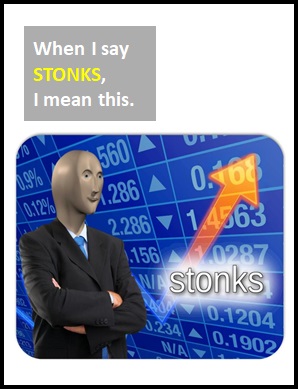 [STONKS is a deliberate misspelling of "stocks."]

Examples of STONKS in Sentences

Here are examples of STONKS being used in conversations:

(Here, STONKS is used to reply to a foolish finanical decision.)

An Academic Look at STONKS

STONKS is a deliberate misspelling of stocks. It is typically used as a noun (i.e., a naming word). For example:

(Here, STONKS is being used as a noun.)

Example of STONKS Used in a Text

STONKS
Help Us To Improve Cyber Definitions
Please tell us using this form.