What Does PAPER HANDS Mean?

PAPER HANDS means "someone who sells too early." In the world of the stock market, someone with "paper hands" exits a position, or folds early because the financial risk is high. In other words, they panic sell. Their hands are described as paper because they fold or break with the slightest pressure.

The term has negative connotations and is in common use on the subreddit WallStreetBets (WSB). It is typically depicted with the toilet paper emoji.

"Paper hands" contrasts with "diamond hands." A trader with "diamond hands" believes in the eventual profitability of their stocks, and because of this, they continue to hold even when their value drops below the initial purchase price.

When I write PAPER HANDS, I mean this: 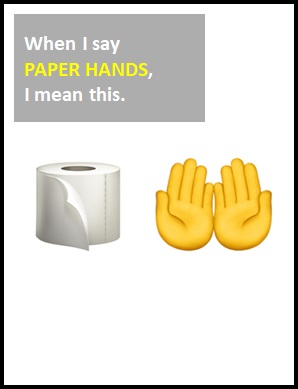 [Someone with paper hands exits a position early.]

Examples of PAPER HANDS in Sentences

Here are examples of PAPER HANDS being used in conversations:

An Academic Look at PAPER HANDS

PAPER HANDS is typically used as a noun (i.e., a naming word).

Example of PAPER HANDS Used in a Text

bagholder (someone whose trading position has severely dropped in value) dd (due diligence) gay bear (someone who expects a stock to decline, a stock shorter) gme (game stop stock) retards (share traders) stonks (stocks) tendies (gains or profits in stocks or shares)