BAGHOLDER means "someone whose position has severely dropped in value." In financial slang, a bagholder is a shareholder left holding shares of worthless stocks. Typically, this person loses most or all or their money.

The term was created by combining "shareholder" with the expression "left holding the bag."

This expression has two potential origins.

When I write BAGHOLDER, I mean this: 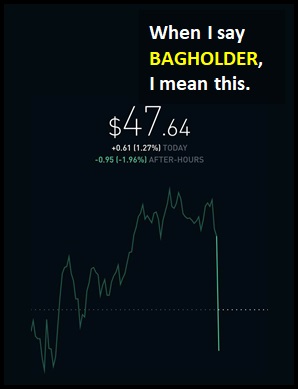 [A BAGHOLDER loses most or all or their money.]

Examples of BAGHOLDER in Sentences

Here are examples of BAGHOLDER being used in conversations:

An Academic Look at BAGHOLDER

As it is formed by merging two words into one, BAGHOLDER is classified as a portmanteau word. It is formed by amalgamating the terms share holder and left holding the bag.

Example of BAGHOLDER Used in a Text

BAGHOLDER
Help Us To Improve Cyber Definitions
Please tell us using this form.