What Does RETARDS Mean?

RETARDS means "Traders." RETARDS is an anagram of Traders. It is one the self-given titles to the users of WSB on Reddit.

The subreddit is known for its profane and juvenile nature, with members often referring to themselves as "autists," "retards," and "degenerates." They refer to themselves with these names to diminish liability when encouraging others to take gambles in the stock market. At the end of a post on WallStreetBets, you will often see the sentence:

"This is not financial advice. I'm just a retard who likes the stock."

When I write RETARDS, I mean this: 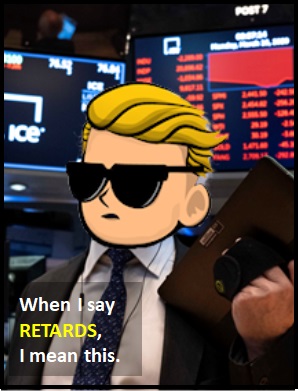 RETARDS is an anagram of traders.

Examples of RETARDS in Sentences

Here are examples of RETARDS being used in conversations:

An Academic Look at RETARDS

RETARDS is an anagram of traders. Anagrams are words that share the same letters as each other.

Example of RETARDS Used in a Text

RETARDS
Help Us To Improve Cyber Definitions
Please tell us using this form.