What Does LOLOL Mean?

LOLOL is an acronym used to indicate that the sender finds something hilarious. LOLOL is an exaggerated form of writing LOL (Laughing Out Loud). However, as with almost all forms of LOL, the use of LOLOL has become more nuanced and it is often used sarcastically. (Thereby indicating that the sender did not find what was said even slightly funny.)

Check out this page and see the video below on the evolution of LOL.

When I write LOLOL, I mean this: 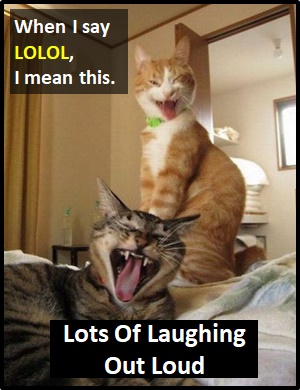 Examples of LOLOL in Sentences

Here are examples of LOLOL being used in conversations:

(Here, LOLOL is probably being used to express genuine amusement.)

An Academic Look at LOLOL

As it is spoken like a word, LOLOL is an acronym. Acronyms contrast with initialism abbreviations, which are pronounced using their individual letters.

LOLOL is also an interjection. An interjection is not grammatically related to any other part of the sentence. It is included in a sentence (usually at the start) to express a sentiment such as surprise, disgust, joy, excitement or enthusiasm.

Before the digital era, we might have said something like "Ha ha, very funny" instead of using LOLOL.

Example of LOLOL Used in a Text

LOLOL
Help Us To Improve Cyber Definitions
Please tell us using this form.