What Does ROFLOL Mean?

The abbreviation ROFLOL is used with the meaning "Rolling On Floor, Laughing Out Loud" as a way to express amusement. Although LOL (Laughing Out Loud) is still widely used to indicate amusement and approval, its significance has become diluted through overuse and it is now just as likely to be used sarcastically. Therefore, abbreviations such as ROFLOL have evolved to express genuine amusement.

When I write ROFLOL, I mean this: 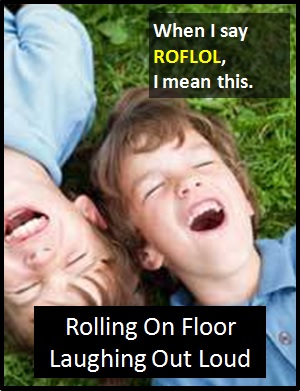 Examples of ROFLOL in Sentences

Here are examples of ROFLOL being used in conversations:

An Academic Look at ROFLOL

As it is spoken like a word, ROFLOL is an acronym. Acronyms contrast with initialism abbreviations, which are pronounced using their individual letters.

ROFLOL is typically used as a standalone declarative sentence (i.e., a statement). It is not normally used as another part of speech within a wider sentence.

Before the digital era, we might have said something like "I'm Creasing Up With Laughter!" or "I'm Cracking Up!" instead of using ROFLOL with the meaning "Rolling On Floor, Laughing Out Loud".

Our Slide Show "The Evolution of LOL"

Example of ROFLOL Used in a Text