What Does LULZ Mean?

Lulz means "Laughs" and "LOL." Here is more information about lulz, with examples of use.

Lulz is a word based on the abbreviation LOL (Laugh Out Loud). It is used as a synonym of both "laughs" (when laughs is a plural noun) and "lol" (when lol is spoken like a word). For example: Lulz is also spelled as lawls and lawlz.

Check out this page to learn more about LOL and its derivatives.

When I write LULZ, I mean this: 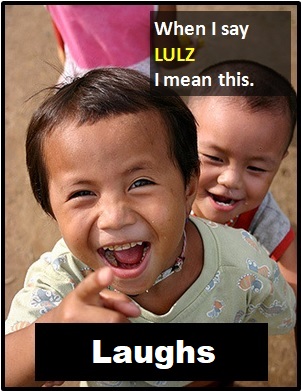 LULZ means "laughs" and is an alternative spelling of lol.

LULZ is also an alternative spelling of LOL (Laugh Out Loud).

An Academic Look at LULZ

Lulz can be considered a neologism (i.e., a newly coined word or term which has emerged into everyday use). Some neologisms are formally accepted into mainstream language (at which point, they cease to be neologisms), and some wither until they can longer be considered everyday terms.

A neologism can be:

Example of LULZ Used in a Text