Read about more derivatives of LOL.

LOLQ means "Laugh out Loud Quietly (see also LOQ)". This is the most common meaning for LOLQ on social-media platforms such as Twitter, Facebook, and Snapchat.

When I write LOLQ, I mean this: 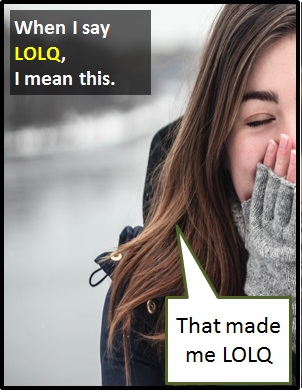 Examples of LOLQ in Sentences

Here is an example of LOLQ being used in a conversation:

An Academic Look at LOLQ

Often pronounced "LOL-Que," LOLQ can be considered an acronym (i.e., an abbreviation spoken like a word). Acronyms differ from initialism abbreviations, which are pronounced using their individual letters.

Before the digital era, we would have just described LOLQ as a stifled chuckle or a chortle.

Example of LOLQ Used in a Text

LOLQ
Help Us To Improve Cyber Definitions
Please tell us using this form.