FWU means "F*cking With You."

The abbreviation FWU is used with the meaning "F*cking With You." It is a colloquialism for "I am just messing with you" or "I am joking with you." FWU is usually delivered after some apparently bad news that was intended as a joke. It has the effect of undoing what has just been said. (See below for examples.)

"F*cking With You" is also abbreviated as FWY.

When I write FWU, I mean this: 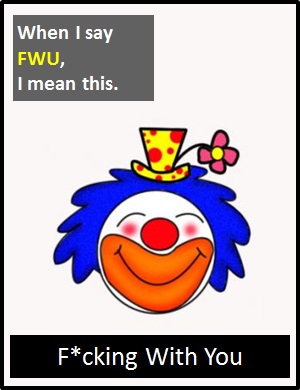 FWU indicates that something is meant as a joke.

Examples of FWU in Sentences

Here are examples of FWU being used in conversation:

An Academic Look at FWU

FWU is typically used with the meaning "F*cking With You" as a standalone declarative sentence (i.e., a statement). It is not normally used as a part of speech in a wider sentence.

As it is pronounced using its individual letters (i.e., "Eff Dblyoo Yoo"), FWU is classified as an initialism abbreviation. Initialisms are different to acronyms, which are spoken like words. FWU is not often spoken using its letters. It is usually employed for efficiency in writing and not efficiency in speech.

Before the digital era, we might have just said "F*cking With You" or something like "Just messing" or "Only joking" instead of using FWU.

Example of FWU Used in a Text

FWU
Help Us To Improve Cyber Definitions
Please tell us using this form.