UG2BK means "You've got to be kidding." UG2BK is an expression of disbelief (suggesting that you think the person who has just told you something is playing a joke). The term UG2BK is a common response to being told something surprising.

"Kidding" means "joking" (as in "you're kidding me"). The verb "to kid" probably derives from kids' (i.e., children's) predisposition to make up stories. However, it has also been suggested that "to kid" might be linked to the death of a notorious 17th century Scottish sailor (Captain William Kidd), who was tried and hung as a pirate in 1701. During the first two attempts to hang him, the rope broke, but it held on the third try, and it was said that the executioners were just "joking" with the first two efforts, and this later became "kidding."

When I write UG2BK, I mean this: 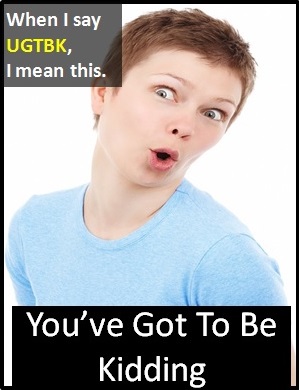 UG2BK means "you've got to be kidding."

Examples of UG2BK in Sentences

Here are examples of UG2BK being used in conversations:

An Academic Look at UG2BK

Before the digital era, we would have just said something like "You have got to be joking" instead of UG2BK.

Example of UG2BK Used in a Text