What Does YK Mean?

YK is often used to refer to American rapper, singer and songwriter "YK Osiris." It is also an abbreviation used with the meanings "You're Kidding!" and "You Know?" Here is more information about these definitions of YK.

In 2019, YK's single "Worth It" reached number 48 on the Billboard Hot 100. The song was the lead single from his debut album "The Golden Child," released in the same year.


YK Osiris - Worth It (Official Video)

YK is also an abbreviation used widely online and in text messaging with the meaning "You're Kidding!" to show strong emotion (e.g., joy, surprise, disbelief, disgust). YK is typically used to respond to a shocking message.

YK is also used with the meaning "You Know?" (or "You Know"). Just as in speech, YK is often inserted into a conversation as a pause, while thinking of what to say next or to hide embarrassment; at the end of a statement, to make sure the recipient understands; to add emphasis to what has been said or ensure that it has been understood.

When I write YK, I mean this: 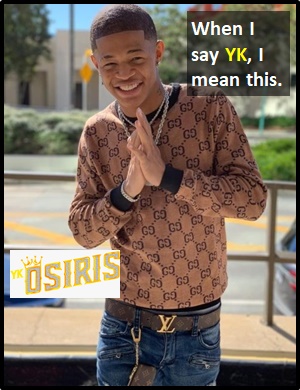 YK also means "You're Kidding!" and "You Know?"

"You're Kidding!" is another definition for YK.

Examples of YK in Sentences

Here are examples of YK being used in conversations:

An Academic Look at YK

As it is pronounced using its individual letters (i.e., "Why Kay"), YK is classified as an initialism abbreviation. Initialisms are different to acronyms, which are spoken like words.

Before the digital era, we might have said something like "You're having me on, right?" or "Jeepers!" instead of using YK with the meaning "You're Kidding!"

Example of YK Used in a Text