What Does COP Mean?

COP means "Police Officer" and "Close Of Play" Here is more information about each of these definitions of COP, with some hilarious COP jokes!

COP is a contraction of the word "copper," which is slang for police officer.

There are a number of theories as to the origins of the term "copper" to refer to a police officer, including:

COP is also an abbreviation used in financial markets and business circles with the meaning "Close of Play." It signifies the end of the working day.

It is thought that the term originated in cricket or tennis, which are both sports where the end of a day's play is not necessarily the end of the match. For example, "At COP on the second day of the third test, Pakistan lead India by 21 runs."

Other abbreviations with similar meanings to COP in this context include:

When I write COP, I mean this: 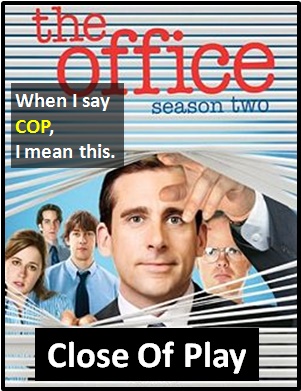 COP is also common slang for a police officer.

"Close of Play" is another common definition for COP, especially in business circles.

Examples of COP in Sentences

Here are examples of COP (i.e., police officer) being used in jokes:

An Academic Look at COP

When used as slang for a police officer, COP is a contraction of the word "copper."

When used as an abbreviation with the meaning "Close Of Play," COP is an initialism abbreviation. Technically, this means it is pronounced using its individual letters (i.e., See Oh Pee).

Example of COP Used in a Text