What Does EOD Mean?

EOD means "End of Discussion," "End of Day," and "Explosive Ordnance Disposal." Here is more information about each of these definitions of EOD.

The abbreviation EOD is typically used to indicate that as far as the sender is concerned the discussion is over. It is used to emphasize that the sender insists on a point and will no longer listen to arguments against it. For example:

In financial markets the "End Of Day" is the end of the trading day, i.e., the time at which trading stops.

Other abbreviations with similar meanings to EOD in this context include:

When used with the meaning Explosive Ordnance Disposal EOD is the process of rendering safe and disposing of both improvised explosive devices and military munitions, including those that have become hazardous through damage or deterioration.

In business circles "End of Day" is a common definition for EOD.

In military and law enforcement "Explosive Ordnance Disposal" is a common definition for EOD.

When I write EOD, I mean this: 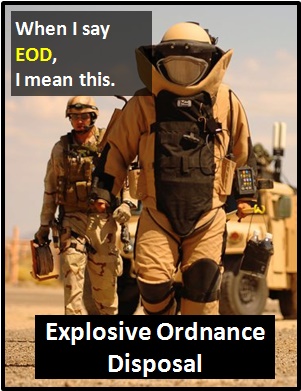 EOD can also mean "End Of Discussion" and "End Of Day."

Examples of EOD in Sentences

Here are examples of EOD being used in jokes with the meaning "End Of Discussion":

An Academic Look at EOD

EOD is an initialism abbreviation. Technically, this means it is pronounced using its individual letters (i.e., Ee, Oh, Dee).

When used with the meaning "End of Discussion" EOD is used as a standalone declarative sentence (i.e., a statement). It is not used as another part of speech within a wider sentence.

Example of EOD Used in a Text

EOD
Help Us To Improve Cyber Definitions
Please tell us using this form.