381 usually means "I Love You." It can also refer to the "381 Movement" (an activist group). Here's more information about each of these definitions of 381, with examples of use and explanatory videos.

Using numbers such as 381 allows the sender to to express devotion without suffering the embarrassment felt by some people when saying "I love you."

Other numbers used to express devotion in the same way include:

Video Summarizing 381 as "I Love You"

Here's a short video explaining how to use 381 with the meaning "I Love You."

In June 2020, an activist group calling itself the "381 Movement" emerged in Richmond (Virginia), during the protests surrounding the death of George Floyd, who was killed on 25 May 2020, by Minneapolis (Minnesota) police officer Derek Chauvin.

Organizers of the "381 Movement" stated that the name was inspired by the 381-day-long Montgomery (Alabama) bus boycotts of the 1950s, and they would be protesting for 381 days. They explained, "... the 381 Movement aims to promote change and equality for the people of the world." 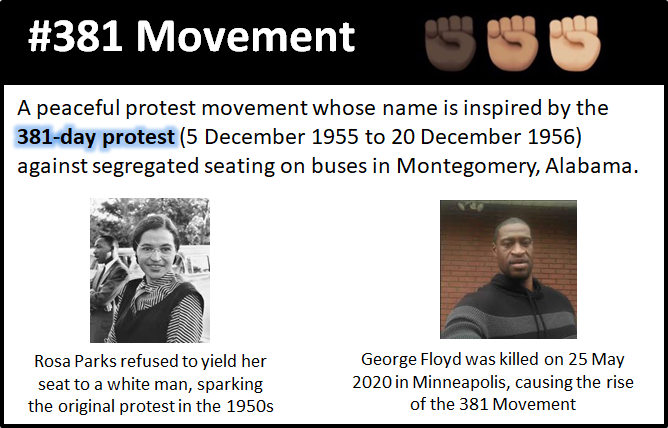 Here is a short video summarizing the rise of the 381 Movement. 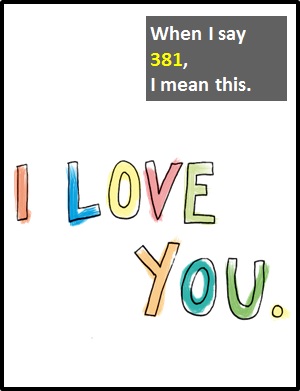 Summary of Key Points for First definition of 381

Summary of Key Points for Second definition of 381

Examples of 381 in Sentences

Here is an example of 381 being used in a (shouted!) conversation:

When used with the meaning "I Love You," 381 is classified as a cyber term as opposed to an initialism abbreviation or an acronym.

Cyber term terms were introduced for brevity, but, particularly with the advent of predictive texting and on-screen keyboards, they are now mostly employed for fun.

Before the digital era, we would have just said "I love you" instead of using the cyber term 381.