ATEOTD means "At The End Of The Day."

"At The End Of The Day" is an idiom meaning "when everything has been taken into consideration" or "in the final analysis." Mainly due to overuse by football managers and players in post-match interviews, the use of ATEOTD in UK english is now considered clichéd. For example: Of note, "At The End Of The Day" is the title of a song sung by Anne Hathaway, Hugh Jackman and the cast of the musical film "Les Misérables," released in 2012.

When I write ATEOTD, I mean this: 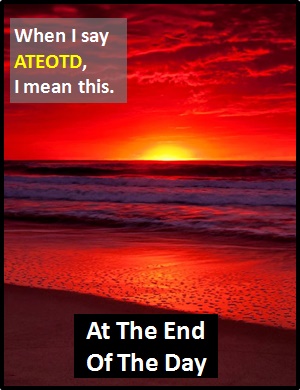 Examples of ATEOTD in Sentences

Here are examples of ATEOTD being used in conversations:

An Academic Look at ATEOTD

ATEOTD is an initialism abbreviation. Technically, this means it is pronounced using its individual letters (i.e., "Ay Tee Ee Oh Tee Dee"), but as this is harder to say than "At the End of the Day" it is not often said using its letters. In other words, the abbreviation ATEOTD is for efficiency in writing and not efficiency in speech.

"At The End Of The Day" is an idiom. An idiom is a commonly used expression whose meaning does not relate to the literal meaning of its words.

Before the digital era, we might have said something like "When all is said and done" or "To conclude" instead of using ATEOTD.

Example of ATEOTD Used in a Text

ATEOTD
Help Us To Improve Cyber Definitions
Please tell us using this form.