What Does ALBA Mean?

ALBA is the Scottish-Gaelic name for Scotland. It first appeared in Ancient Greek and Latin texts as "Albion," which actually referred to the whole of Britain.

Over the course of time, Gaelic speakers changed Albion to Alba. They used the name to refer to the former kingdom of the Picts, a group of Celtic-speaking people who lived in eastern and northern Scotland until the 10th century CE.

ALBA is still used regularly to refer to Scotland. For example: In the 1995 film Braveheart, William Wallace (portrayed by Mel Gibson) shouts "Alba gu bràth" ("Scotland Forever") to his assembled troops before the battle of Stirling Bridge.

When I write ALBA, I mean this: 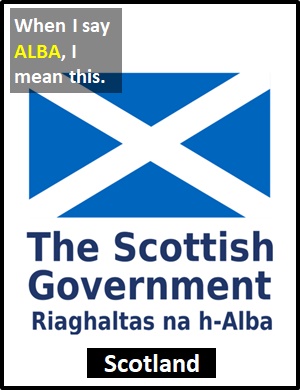 The logo of the Scottish Government includes its Gaelic title.

An Academic Look at ALBA

ALBA is a Gaelic word used as a proper noun. A proper noun is the name given to a specific person, place or thing (e.g., Europe, Bolivia, New York, Monday, Sam). Proper nouns are written with capital letters regardless of where they appear in a sentence.

Example of ALBA Used in a Text

ALBA
Help Us To Improve Cyber Definitions
Please tell us using this form.