What Does ALAP Mean?

Below are the most common definitions of the abbreviation ALAP:

As Late As Possible

ALAP is typically used with the meaning "As Late As Possible" in response to a question about an expected time, usually of arrival or of the completion of an event. For example:

As Long As Possible

ALAP is typically used with the meaning "As Long As Possible" when talking about keeping something going for the maximum possible amount of time. For example:

As Little As Possible

ALAP is typically used with the meaning "As Little As Possible" in response to a question about a quantity or amount. For example: Of note, ALAP (written Alap) is also an improvised, unaccompanied prelude to an Indian musical raga.

"As Late As Possibe, As Long As Possible, or As Little As Possible" is the most common definition for ALAP on Snapchat, WhatsApp, Facebook, Twitter, Instagram, and TikTok.

When I write ALAP, I mean this: 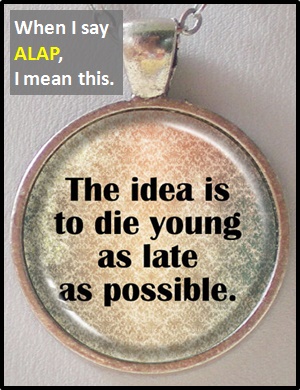 As Late As Possible is one of the definitions of ALAP.

Examples of ALAP in Sentences

Here are examples of the abbreviation ALAP being used in conversations:

An Academic Look at ALAP

ALAP is an initialism abbreviation. This means it is pronounced using its individual letters (i.e., "Ay Ell Ay Pee"). (Initialisms contrast with acronyms, which are spoken like words.)

ALAP is normally used as a standalone declarative sentence (i.e., a statement). In other words, it is not typically used as another part of speech within a wider sentence.

Example of ALAP Used in a Text

ALAP
Help Us To Improve Cyber Definitions
Please tell us using this form.