What Does GB Mean?

The abbreviation GB is used with a large number of meanings, including "Gigabyte," "Great Britain," "Gravity Bong," "God Bless," and "Gang Bang." Here is more information about each of these definitions of GB.

The initials GB are widely recognized as an abbreviation for "Gigabyte." A GB is a measure of information storage capacity on a computer. It is equal to 1 billion bytes or 1 thousand megabytes (MB).

GB also means "Great Britain." In this context, GB refers to the large island that is home to the countries of England, Scotland, and Wales. It also refers to the political entity "Great Britain," which, as well as the island of GB, also includes many smaller surrounding islands, such as the Orkney Islands, the Shetland Islands, the Hebrides and others.

GB does not include any part of the island of Ireland, nor the Isle of Man or the Channel Islands.

Amongst smokers of cannabis, GB stands for "Gravity Bong." In this context a GB is a device used to enhance the potency of cannabis. A GB works by funneling smoke through water and pushing it into the smoker's lungs.

GB is also used as a straightforward abbreviation of the phrases "God Bless" and "Gang Bang."

"Great Britain" is another common definition for GB.

"Gravity Bong" is a common definition for GB amongst smokers of cannabis.

"God Bless" is another definition for GB.

When I write GB, I mean this: 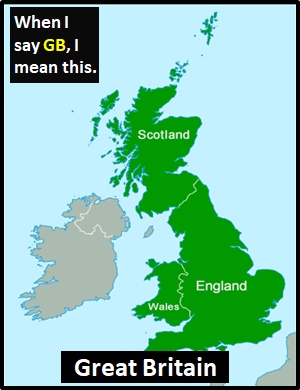 Example of GB Used in a Text

GB
Help Us To Improve Cyber Definitions
Please tell us using this form.