What Does BBC Mean?

The abbreviation BBC is widely recognized as the initials of the British Broadcasting Corporation, a public service broadcaster. The BBC is primarily funded by an annual television license fee, paid by all British households, companies, and organizations which use any type of equipment to receive or record live television broadcasts. The BBC World Service broadcasts around the world in 28 languages.

When I write BBC, I mean this: 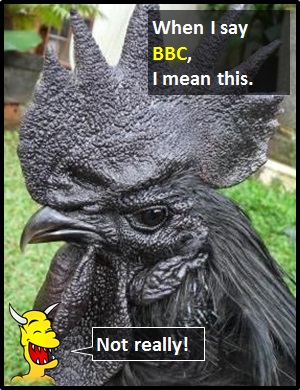 Examples of BBC in Sentences

Here's an example of BBC being used in conversation:

An Academic Look at BBC

Whether used with the meaning "Big Black Cock" or "British Broadcasting Corporation," BBC is an initialism abbreviation. This means it is pronounced using its individual letters (i.e., Bee Bee Cee). Initialisms are different to acronyms, which are spoken like words.

Example of BBC Used in a Text

BBC
Help Us To Improve Cyber Definitions
Please tell us using this form.