What Does ACCOUNTANT Mean?

ACCOUNTANT means "Sex Worker." On TikTok, the viral "I'm an accountant" song is a sound played by users who dodge questions about how they truly earn money by telling people they're an accountant.

TikTokers use this song as a tongue-in-cheek way to dodge questions about their true jobs because "nobody asks you questions when you say you're an accountant." Originally, Rocky Paterra wrote the song about how he would dodge questions as a struggling actor. The term was then adopted by people working across the sex industry. It has become the meme song of choice for strippers, "sugar babies," and particularly creators on the content subscription platform OnlyFans.

Here is the original song, written in 2020, by Rock Paterra: https://www.youtube.com/watch?v=yNLNHzjeSd8

When I write ACCOUNTANT, I mean this: 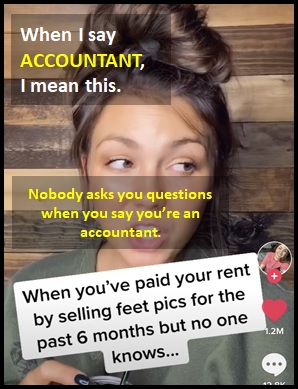 [Sex workers claim they are accountants to avoid people asking questions about their work.]

Examples of ACCOUNTANT in Sentences

Here are examples of ACCOUNTANT being used in conversations:

An Academic Look at ACCOUNTANT

ACCOUNTANT is typically used as a noun (i.e., a naming word). For example:

(Here, ACCOUNTANT is being used as a noun.)

Example of ACCOUNTANT Used in a Text

ACCOUNTANT
Help Us To Improve Cyber Definitions
Please tell us using this form.