What Does ACC Mean?

ACC is an abbreviation of the words "Actually" and "Account." It also stands for "Atlantic Coast Conference." Here is more information about each of these definitions of ACC. (Examples of use can be found below.)

When I write ACC, I mean this: 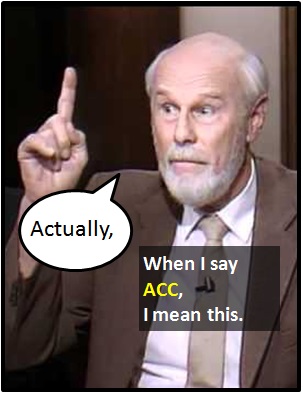 Examples of ACC in Sentences

Here are examples of ACC being used in conversations:

An Academic Look at ACC

When used with the meaning "Atlantic Coast Conference," ACC is an initialism abbreviation, because it is pronounced using its individual letters (i.e., "Ay See See").

Example of ACC Used in a Text