What Does WCW Mean?

The abbreviation WCW means "Woman Crush Wednesday" and "World Championship Wrestling." Here's more information about these definitions of WCW. (Examples of use can be found below.)

Nowadays, the abbreviation WCW is most commonly used on social-media apps such as Snapchat, Twitter and Facebook, with the meaning "Woman Crush Wednesday." It is commonly seen in the form #WCW (i.e., with a hashtag).

WCW is used by men and women to show their appreciation for a female friend, partner or celebrity. The term is often used in the context of an award (e.g., for being a great friend, for being gorgeous, or for being sexy).

The most common definition of WCW used to be "World Championship Wrestling". This was an American professional wrestling promotion, established in 1988, which effectively went out of business in 2001.

"World Championship Wrestling" was another popular definition for WCW.

When I write WCW, I mean this: 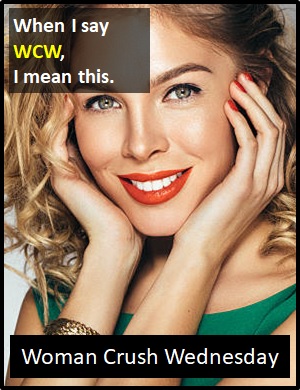 Examples of WCW in Sentences

Here are examples of WCW being used in conversation:


(Here, WCW is being used with the meaning "Woman Crush Wednesday.")


(Here, WCW is being used with the meaning "World Championship Wrestling.")

An Academic Look at WCW

Whether used with the meaning "Woman Crush Wednesday" or "World Championship Wrestling," the abbreviation WCW is typically used as a noun (i.e., a naming word). However, it can also be used as an adjective (i.e., a describing word). For example:

As it is pronounced using its individual letters (i.e., "Dublyoo, See, Dublyoo"), WCW is classified as an initialism abbreviation. Initialisms are different to acronyms, which are spoken like words.

Example of WCW Used in a Text

WCW
Help Us To Improve Cyber Definitions
Please tell us using this form.