What Does MCM Mean?

What Does MCM Mean?

MCM means "Mighty Car Mods" and "Man Crush Monday." It is also a French Music TV Video Channel. Here is a little more information about each of these definitions of MCM.

MCM are the initials of "Mighty Car Mods," a hugely-successful YouTube channel that focuses on car-enthusiast culture, especially DIY car modifications. MCM was created by hosts Blair "MOOG" Joscelyne and Martin "Marty" Mulholland and is one of the most successful shows of its type on YouTube.

MCM is widely used on platforms such as Instagram, Snapchat, Twitter and Facebook, with the meaning "Man Crush Monday." It is commonly seen with a hashtag (i.e., #MCM).

MCM is typically used to tag posts about attractive men, but can also be used as a term of endearment in chats between couples. It is also used by both men and women to show their appreciation for a male friend, partner or celebrity. It is often used in the context of an award. For example: The use of MCM was inspired by WCW (Woman Crush Wednesday).

MCM is also the name of a French music video TV channel, which is the French version of MTV.

When I write MCM, I mean this: 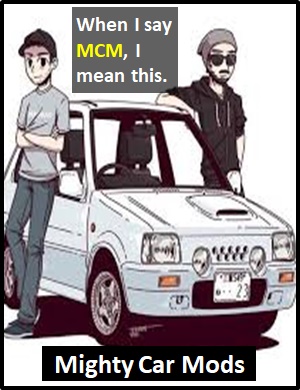 MCM also means "Man Crush Monday" and is the name of a French TV Channel.

"Mighty Car Mods" is the most common definition for MCM on YouTube.

MCM is also the name of a French Music Video TV Channel.

Examples of MCM in Sentences

Here is an example of MCM being used in a conversation, with the meaning "Man Crush Monday":

An Academic Look at MCM

When used with the meaning "Man Crush Monday," the abbreviation MCM is typically used as a noun. However, it can also be used as an adjective. For example:

Example of MCM Used in a Text