What Does SWANK Mean?

Single Woman And No Kids

The acronym SWANK is typically used on adult dating sites and in personal advertisements with the meaning "Single Woman And No Kids" as an indication of the status of a woman seeking a partner. SWANK may also be used by someone seeking a female partner who is single and has no children.

Second Wife And No Kids

Less commonly, SWANK has also been noted with the meaning "Second Wife And No Kids." In this context, SWANK can refer to the status of a woman who is a SWANK or a man who is married for the second time and has no children.

SWANK is also a word, widely used in the UK, to mean "blatantly luxurious, expensive or cool." For example:

When I write SWANK, I mean this: 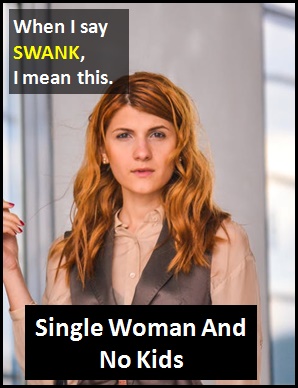 Examples of SWANK in Sentences

An Academic Look at SWANK

Whether used with the meaning "Single Woman And No Kids" or "Second Wife And No Kids," SWANK is an acronym (i.e. an abbreviation spoken as a word). Acronyms differ from initialism abbreviations, which are pronounced using their individual letters.

The use of SWANK in personal advertisements to mean "Single Woman And No Kids" pre-dates the digital era.

Example of SWANK Used in a Text

SWANK
Help Us To Improve Cyber Definitions
Please tell us using this form.