What Does PUMA Mean?

PUMA is a term used to describe a woman in her 30s who likes to date or have sexual relationships with younger men. The word PUMA tends not to be used in a derogatory way. In fact, it carries a connotation of the woman being sexy, if a little predatory

PUMA is one of several animal-related terms that have emerged to describe the age difference between male and female partners. For example:

When I write PUMA, I mean this: 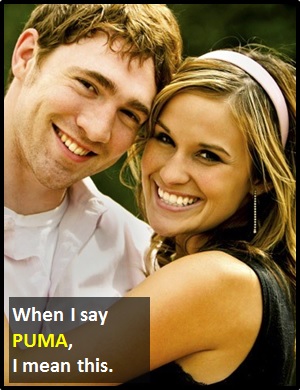 Examples of PUMA in Sentences

Here are examples of PUMA being used in conversations:

An Academic Look at PUMA

The word PUMA typically plays the role of a noun, but it is occasionally seen as an adjective. For example:

(Here, PUMA is a noun.) (Although rare, PUMA can also be used as an adjective.)

Before the digital era, we might have said something like "Mrs Jones" or "cradle snatcher" instead of PUMA.

Example of PUMA Used in a Text

PUMA
Help Us To Improve Cyber Definitions
Please tell us using this form.