USSIE means "Group Selfie" or "Us Selfie." It is a self-taken group photograph. A photograph may qualify as an USSIE when the picture taker and one other person are in the photograph. There is no maximum number of participants. Typically, the background of an USSIE is the reason for the photograph. For example, many USSIES are taken with celebrities or in front of monuments.

Possibly the most famous USSIE is "the picture that broke Twitter" at the 2014 Oscars. 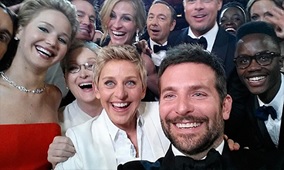 Within a few hours, this USSIE had been retweeted by more than 2.5 million people.

When I write USSIE, I mean this: 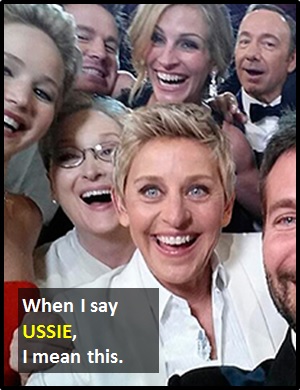 An USSIE is a self-taken group photograph.

Examples of USSIE in Sentences

Here is an example of USSIE being used in a conversation:

An Academic Look at USSIE

Example of USSIE Used in a Text

USSIE
Help Us To Improve Cyber Definitions
Please tell us using this form.