What Does SHELFIE Mean?

SHELFIE means "Shelf Selfie." A SHELFIE is a photo taken to show off what is on someone's shelf. Typically, the person taking the photograph is also in the picture. SHELFIES are usually taken to show off books, figures, or collectable memorabilia. Many believe the term was coined by author Rick Riordan.

SHELFIES probably came about as a result of the popularity of SELFIE. SHELFIE is a witticism based on SELFIE.

When I write SHELFIE, I mean this: 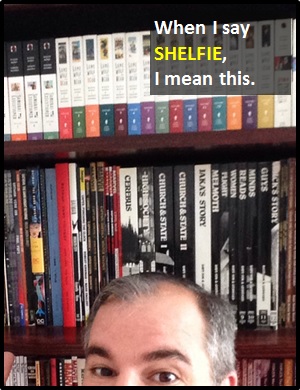 The image shows a man taking a picture with a bookshelf.

Examples of SHELFIE in Sentences

Here is an example of SHELFIE being used in a conversation:

An Academic Look at SHELFIE

Example of SHELFIE Used in a Text

SHELFIE
Help Us To Improve Cyber Definitions
Please tell us using this form.