YOUIE means "You Selfie." A YOUIE is a selfie of another person. (So actually, another word for a YOUIE is "photograph"!) The term exists because it is a comical way to describe the opposite of a SELFIE.

When I write YOUIE, I mean this: 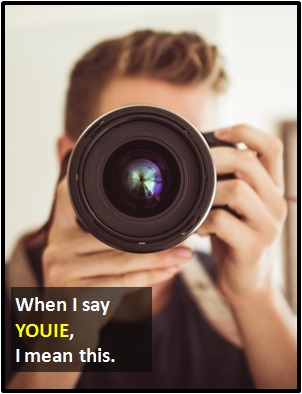 The image shows somebody taking a photograph of somebody else.

Examples of YOUIE in Sentences

Here is an example of YOUIE being used in a conversation:

An Academic Look at YOUIE

Example of YOUIE Used in a Text

YOUIE
Help Us To Improve Cyber Definitions
Please tell us using this form.