What Does UG Mean?

UG most commonly means "Ugly." UG can be used with regard to a person, a place or a situation, which is deemed to be unattractive, unsightly or dangerous.

Although less common, UG can also mean "underground," which describes something as secretive. For example: When spelled 'U'G, it is a slang phrase for "you gansta." (This term was popularized by the hip-hop artist Rocko's 2015 track entitled "U Gangsta Right.")

When I write UG, I mean this: 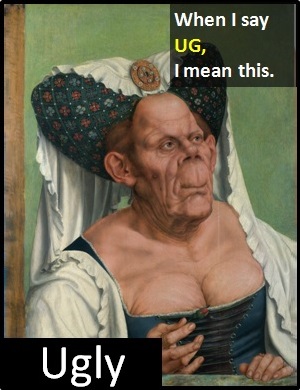 Examples of UG in Sentences

Here are examples of UG being used in conversations:

An Academic Look at UG

UG is used as an adjective (i.e., a describing word). For example:

Before the digital era, we would have just said "ugly" instead of UG.

Example of UG Used in a Text

UG
Help Us To Improve Cyber Definitions
Please tell us using this form.