What Does UDS Mean?

UDS means "Ugly Duckling Syndrome." When used online, UDS usually refers to a person who was an unattractive child before blossoming into a handsome or beautiful adult.

Unappealing youngsters often compensate for their perceived ugliness by developing a gentle modesty and are often lovely, caring individuals. These characteristics are in place when they develop as adults, which together with their enhanced looks suddenly make them enormously attractive, rounded people. (They are often less conceited than people who grow up knowing or believing they are good looking.)

UDS is also slang for the insult "Ugly Dumb Sh*t."

Use context to determine which meaning is intended.

When I write UDS, I mean this: 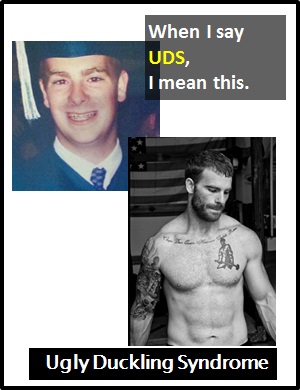 UDS means an unattractive child who grows into an attractive adult.

Examples of UDS in Sentences

Here are examples of UDS being used in conversations:

An Academic Look at UDS

UDS is an initialism abbreviation. Technically, this means it is pronounced using its individual letters (i.e., Yu Dee Ess), but as this is harder to say than "Ugly Duckling Syndrome," it is not often uttered using its letters. In other words, the abbreviation UDS is for efficiency in writing and not efficiency in speech.

UDS is also typically used as a noun. (NB: The full version is a noun phrase.) For example:

(UDS plays the role of a noun in both cases.)

Before the digital era, we might have said something like "She's grown up to be very beautiful" instead of UDS.

Example of UDS Used in a Text

UDS
Help Us To Improve Cyber Definitions
Please tell us using this form.