What Does UGGO Mean?

UGGO means "Ugly Person." Of note, the term UGGO (like UG) can sometimes just means "Ugly" (e.g., He is UGGO). However, there is distinction developing between UGGO and UG in that UGGO more commonly denotes a person. In other words, UGGO is used as a noun, whereas UG is used an adjective.

When I write UGGO, I mean this: 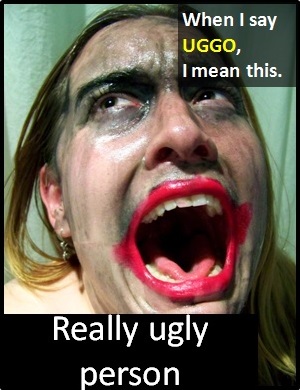 Examples of UGGO in Sentences

Here are examples of UGGO being used in conversations:

An Academic Look at UGGO

UGGO is typically used as a noun (i.e., a naming word). For example:

(Here, UGGO is a noun being used as a predicate nominative.)

Before the digital era, we might have said something like "an aesthetically challenged individual" or "an ugly git" instead of UGGO.

Example of UGGO Used in a Text

UGGO
Help Us To Improve Cyber Definitions
Please tell us using this form.