TTYTT means "To Tell You The Truth." It is similar TBH (To Be Honest), but is far less common.

TTYTT is typically used as a caveat to protect the author from an overly candid statement. In other words, when people start a conversation with TTYTT, they feel this gives them licence to be hurtful or overly critical. However, like TBH, TTYTT can also be used less aggressively, i.e. used as a benign, relatively meaningless phrase with a meaning similar to "If I'm honest..."

When I write TTYTT, I mean this: 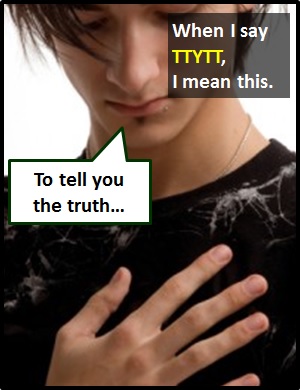 TTYTT is very similar to TBH (To Be Honest).

Examples of TTYTT in Sentences

Here are examples of TTYTT being used in conversations:

(Here, TTYTT is being used like a licence to be hurtful.)

(Here, TTYTT is being used in a benign way.)

An Academic Look at TTYTT

TTYTT is an initialism abbreviation. This means it is pronounced using its individual letters (i.e., Tee Tee Why Tee Tee). (NB: Initialisms contrast with acronyms, which are spoken like words.)

Of interest, TTYTT is a palindromic abbreviation. This means its letters read the same backwards as they do forwards. This adds to its appeal.

Before the digital era, we might have said something like "To be absolutely honest with you" or "I can't tell a lie" instead of TTYTT.

Example of TTYTT Used in a Text