TBQF (To Be Quite Frank) is used to show sincerity in a message. TBQF is typically used as a pre-amble or post-amble to a criticism or a statement that is unsupportive of the recipient. (Note: TBQF is used by passive aggressives, i.e., people who mask controlling or attacking nature using non-emotive and non-confrontational language.)

When I write TBQF, I mean this: 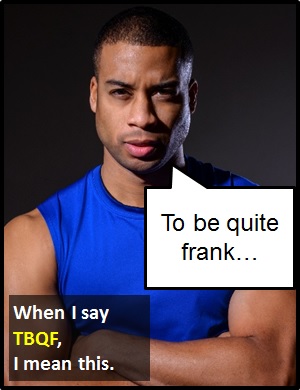 "To be quite frank" is often used ahead of criticism.

Examples of TBQF in Sentences

Here are examples of TBQF being used in sentences:

An Academic Look at TBQF

TBQF is an initialism abbreviation. Technically, this means it is pronounced using its individual letters (i.e., Tee Bee Que Eff), but as this is harder to say than "to be quite frank," it is not usually spoken using its letters. In other words, the abbreviation TBQF is for efficiency in writing and not efficiency in speech.

TBQF is used like an adverb of manner, which is similar in meaning to Speaking frankly.

Before the digital era, we might have said something like "frankly" or "If I may be so bold" instead of TBQF.

Example of TBQF Used in a Text

TBQF
Help Us To Improve Cyber Definitions
Please tell us using this form.