What Does TLDW Mean?

The abbreviation TLDW is used with the meaning "Too Long; Didn't Watch" in response to someone posting a video or video link in a forum thread, on social media or in a message. TLDW indicates that the sender considers the shared content too long or too boring to watch.

Experts in online marketing claim that the attention span of the average viewer is eight seconds and that video content longer than that is unlikely to hold their attention. Other studies have found that the attention of viewers of TV films starts to drift 14 minutes after the film has started and that they are usually distracted by their mobile phone.

According to Wikidepia, the longest film ever made for cinematic release is "Resan", a documentary film released in 1987 that lasts for 873 minutes.

When I write TLDW, I mean this: 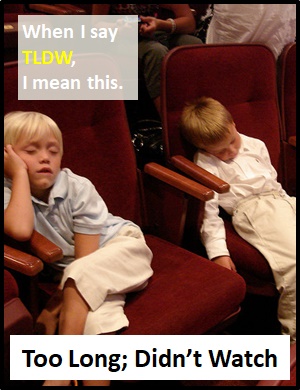 Examples of TLDW in Sentences

Here are examples of TLDW being used in conversations:

An Academic Look at TLDW

As it is pronounced using its individual letters (i.e.,"Tee Ell Dee Dublyoo"), TLDW is classified as an initialism abbreviation. Initialisms are different to acronyms, which are spoken like words.

TLDW is normally used as a standalone declarative phrase (i.e., a statement). It is not typically used as another part of speech within a wider sentence.

Before the digital era, we wouldn't have shared video messages or memes. However, when referring to a film or television programme, we might have just said something like "It was too long" instead of using the abbreviation TLDW to mean "Too Long; Didn't Watch".

Example of TLDW Used in a Text