What Does TLDR Mean?

It is often said that the length of a document is directly proportional to how quickly it's read. This has always been the case, but – particularly since the rise of the internet – people are no longer willing to read through lengthy texts. People expect to find the information they need instantly or to be entertained instantly. In other words, lengthy business articles and wordy jokes are far more likely to be ignored than summaries and cartoon-style jokes.

When I write TLDR, I mean this: 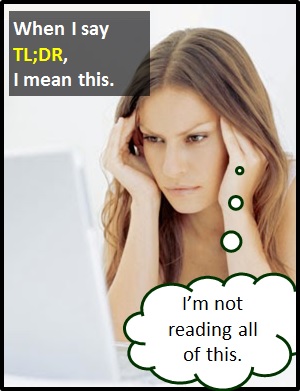 This image shows a girl looking a lengthy article that she has no intention of reading.

Examples of TLDR in Sentences

Here are some examples of TLDR being used in sentences:

An Academic Look at TLDR

TLDR is a shortened version of "It was too long; I did not read it."

TLDR represents two independent clauses separated by a semicolon (as opposed to a period / full stop) to show they are closely related. On occasion, the semicolon is included in the abbreviation. For example: TLDR is an initialism abbreviation. This means it is pronounced using its individual letters (i.e., Tee El Dee Arr). Initialisms contrast with acronyms, which are spoken like words. If TLDR were an acronym, it would be pronounced tilder.

Example of TLDR Used in a Text

Selves-isolating (Locking down with a partner) TLDNR (too long; did not read) TLTR (too long to read) DEAR (drop everything and read) RYN (read your note)