What Does TLDNR Mean?

TLDNR means "Too Long; Did Not Read."

The abbreviation TLDNR is used with the meaning "Too Long; Did Not Read" as a succinct, pointed and (perhaps) rude response to a post or message that the recipient considers too long and has, therefore, not read.

TLDNR is often used on internet forums where users are seeking (free) help to resolve technical problems. It is also commonly seen in argumentative comments "below the line" on online news sites. More rarely, TLDNR may be used by a manager or supervisor when commenting on a piece of work or a report submitted by a subordinate.

TLDNR means exactly the same as the abbreviations TLDR (Too Long Didn't Read) and TLTR (Too Long To Read).

When I write TLDNR, I mean this: 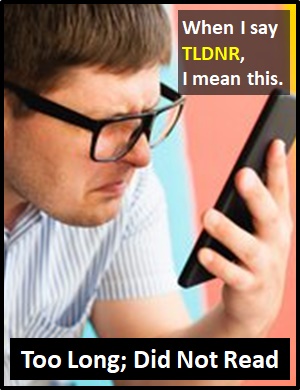 TLDNR: Be brief; Be read.

Examples of TLDNR in Sentences

Here are examples of TLDNR being used in conversations:

An Academic Look at TLDNR

"Too Long; Did Not Read" is typically used as a standalone declarative sentence (i.e., a statement). However, it can also be used as another part of speech within a wider sentence.

As it is pronounced using its individual letters (i.e., "Tee Ell Dee En Ar"), TLDNR is classified as an initialism abbreviation. Initialisms are different to acronyms, which are spoken like words.

Before the digital era, we would have just said "Too Long; Did Not Read" instead of using the abbreviation TLDNR.

Example of TLDNR Used in a Text

TLDNR
Help Us To Improve Cyber Definitions
Please tell us using this form.