What Does STG Mean?

STG usually means "Swear to God." It also means "Shoot 'Em Up," "SubTheGamer," and "Sterling (Currency)." Here is more information about each of these definitions of STG, with examples of use.

STG is widely used with the meaning "Swear To God" to add emphasis to a statement (often a statement of denial or a claim of innocence). For example: STG has exactly the same meaning as ISTG (I Swear To God).

The phrase "Swear To God" is a very popular song title. Check out the 2019 video from the pop group Famba:

STG is used in video gaming to refer to the "Shoot 'Em Up" subgenre of games in the action genre (i.e., games such as Space Invaders and Asteroids). For example:

STG are the initials of "SubTheGamer" a content creator with a YouTube channel dedicated to the NBA.

STG is also used as an abbreviation for "Sterling," as in the pound sterling, the official currency of the United Kingdom.

Here's a short video explaining how to use STG:

"Shoot 'Em Up" is a common definition for STG in gaming related chat, on apps such as Discord and Telegram.

"SubTheGamer" is a popular definition for STG on YouTube.

"Sterling" (Currency) is another definition for STG.

When I write STG, I mean this: 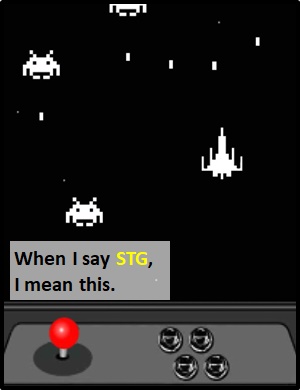 STG means "Shoot 'Em Up" in Gaming. It also means "Swear to God," "SubTheGamer," and "Sterling."

An Academic Look at STG

As it is pronounced using its individual letters (i.e., "Ess Tee Gee"), STG is usually classified as an initialism abbreviation. Initialisms are different to acronyms, which are spoken like words.

When used with the meaning "Swear to God" STG is typically used an interjection. An interjection is included in a sentence to express a sentiment such as surprise, irritation, disgust, joy, excitement, or enthusiasm.

Example of STG Used in a Text

STG
Help Us To Improve Cyber Definitions
Please tell us using this form.