What Does GBU Mean?

The abbreviation GBU is typically used with the meaning "God Bless You" to show gratitude or when saying goodbye. For example:

(Here, GBU expresses gratitude.) (Here, GBU is used to commend the recipient to the care of God.)

The phrase "God Bless You" is also often abbreviated as GBY.

When I write GBU, I mean this: 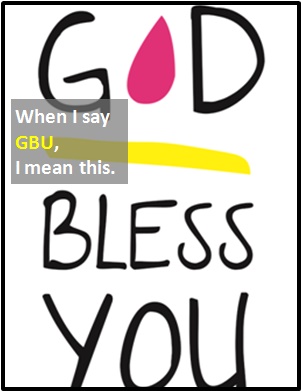 GBU is typically used as an expression of gratitude, or when saying goodbye.

Examples of GBU in Sentences

Here's an example of GBU being used in a joke:

An Academic Look at GBU

Before the digital era, we would have just said "God Bless You" instead of using the abbreviation GBU.

Example of GBU Used in a Text

GBU
Help Us To Improve Cyber Definitions
Please tell us using this form.