What Does STAYCATION Mean?

STAYCATION means "Vacation at Home or in Home Country."

Originally, the word STAYCATION probably referred to a vacation spent at home, visiting attractions and participating in leisure activities that can be completed within one day. Generally, "STAYCATIONERS" would spend every night sleeping in their own beds. However, STAYCATION is now generally accepted to mean any vacation that does not involve overseas travel. In the UK, where the word "holidays" is typically used instead of "vacations," a STAYCATION is now widely recognized as a vacation within the British Isles and many such breaks are now marketed as STAYCATIONS.

The concept of STAYCATIONS gained popularity during the financial crises of 2008/9, when cash-strapped travelers were forced to look for ways to reduce their outgoings. Similarly, the coronavirus pandemic of 2020, again encouraged people to reconsider their travel plans. Additionally, many environmentally-conscious travelers are now concerned about the impact of traditional vacations on the global climate and see "STAYCATIONS" as a way to reduce their own carbon footprint. The word STAYCATION has become so ubiquitous that it has also found its way into theSpanish language. Staycations.es is a directory of leisure activities available in Spain.

STAYCATIONS are also referred to as HOLISTAYS and are similar to DAYCATIONS.

In 2017, Canandian duo The Lovelocks released an album and single entitled STAYCATION, with a slight twist on the theme:


Staycation (LYRIC VIDEO) by The Lovelocks

"Vacation at Home or in Home Country" is the most common definition for STAYCATION on Snapchat, WhatsApp, Facebook, Twitter, and Instagram. Here is some more information about STAYCATION:

When I write STAYCATION, I mean this: 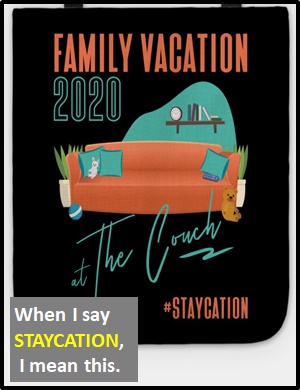 The coronavirus lockdowns of 2020, were jokingly referred to by many people as a "STAYCATION."

Examples of STAYCATION in Sentences

Here are examples of STAYCATION being used in conversations:

An Academic Look at STAYCATION

As it is formed by merging two words into one, STAYCATION is classified as a portmanteau word. It is formed by amalgamating Stay and Vacation.

STAYCATION is also a neologism (i.e., a newly coined word or phrase which has emerged into everyday usage). Some neologisms are formally accepted into mainstream language (at which point, they cease to be neologisms), and some wither until they can longer be considered everyday terms. A neologism can be:

Example of STAYCATION Used in a Text

STAYCATION
Help Us To Improve Cyber Definitions
Please tell us using this form.