The word HOLISTAY is the British-English version of STAYCATION. A HOLISTAY is usually a vacation spent at home, visiting attractions and participating in leisure activities that can be completed within one day. However, like STAYCATION, HOLISTAY is now also generally accepted to mean any vacation that does not involve overseas travel.

Although the word "vacation" is not widely used in the UK, the terms HOLISTAY and STAYCATION are used interchangeably.

HOLISTAYS are similar to DAYCATIONS.

When I write HOLISTAY, I mean this: 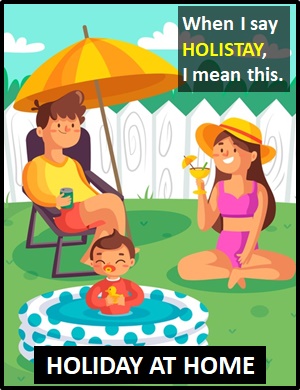 A HOLISTAY is a vacation spent at home.

Examples of HOLISTAY in Sentences

Here are examples of HOLISTAY being used in conversations:

An Academic Look at HOLISTAY

As it is formed by merging two words into one, HOLISTAY is classified as a portmanteau word. It is formed by amalgamating Holiday and Stay.

HOLISTAY is also a neologism (i.e., a newly coined word or phrase which has emerged into everyday usage). Some neologisms are formally accepted into mainstream language (at which point, they cease to be neologisms), and some wither until they can longer be considered everyday terms. A neologism can be:

Example of HOLISTAY Used in a Text

HOLISTAY
Help Us To Improve Cyber Definitions
Please tell us using this form.