What Does SIKE Mean?

SIKE means "Fooled You!" or "Only Joking!"

The slang word "SIKE" is commonly used online and in conversation to indicate that something that has just been typed or said was intended as a joke or a prank on the recipient. SIKE is similar in meaning to phrases such as "Fooled you!" and "Only Joking!" For example: SIKE is pronounced the same as "Psych". It originates from the long-standing use of the word "Psych" to indicate that something was meant as a joke.

SIKE is often followed by the slang word "Nah" to form the slang phrase "Sike Nah!"

When I write SIKE, I mean this: 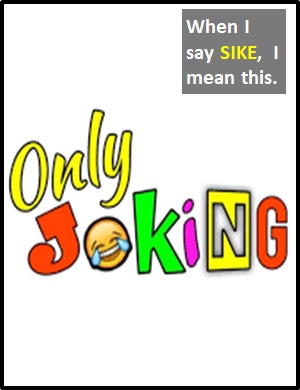 SIKE is similar in meaning to phrases such as "Fooled You!" and "Only Joking!"

Here's a short video explaining how SIKE is used: "SIKE" is the main term, but it is often seen as PSYCH, SIKE-NAH, PSYNAH, or just SN.

"Fooled You!" or "Only Joking!" is the most common definition for SIKE on Snapchat, WhatsApp, Facebook, Twitter, and Instagram. Here is some more information about SIKE.

An Academic Look at SIKE

SIKE is a slang word. Slang refers to words, phrases and uses of language that are regarded as very informal and which are often restricted to a special context or a particular group of users.

SIKE is used an interjection. An interjection is used to express a sentiment such as surprise, irritation, disgust, joy or, as in the case of SIKE, excitement or enthusiasm.

When used in text-based conversations, SIKE is commonly seen without an exclamation mark (i.e., it can be typed "SIKE!" or "SIKE").

Example of SIKE Used in a Text