SELFEYE means "Eye Selfie". A SELFEYE is a SELFIE of just the eye. Many popular celebrities and makeup gurus post SELFEYES on social-media networks (usually Instagram) to show off their eye makeup or eyebrows. The term SELFEYE is attributed to the makeup brand Max Factor, which coined the term to promote their new mascara.

When I write SELFEYE, I mean this: 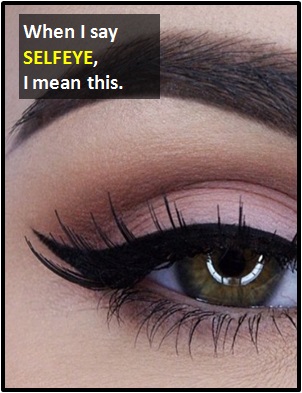 SELFEYE is a portmanteau word formed from "selfie" and "eye."

Examples of SELFEYE in Sentences

Here is an example of SELFEYE being used in a conversation:

An Academic Look at SELFEYE

Example of SELFEYE Used in a Text