What Does PIC Mean?

PIC means "Partner In Crime." The term "Partner In Crime" can be taken literally (i.e., two people involved in some unlawful activity), but it is more typically used in a humorous or affectionate way to describe a pair of friends (or two people engaged in a similar activity, e.g., drinking, fishing, knitting).

When I write PIC, I mean this: 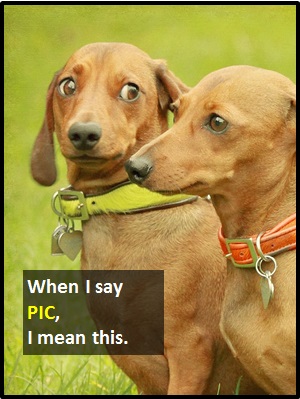 PIC (Partner In Crime) is an affectionate term for two friends or two colleagues who share a common interest.

Examples of PIC in Sentences

Here are examples of PIC being used in conversations:

An Academic Look at PIC

PIC is an initialism abbreviation. Technically, this means it is pronounced using its individual letters (i.e., Pee Aye Cee), but as this is harder to say than "Partner in crime," it is not often uttered using its letters. In other words, the abbreviation PIC is for efficiency in writing and not efficiency in speech.

Example of PIC Used in a Text

PIC
Help Us To Improve Cyber Definitions
Please tell us using this form.